The Sophienau (Zofiówka) factory was founded in 1857. Its first owner was Julius Schwarz, who sold it two years later to Joseph Schachtel. In the factory there were two furnaces functioning, and there were forty workers employed. At first, mainly pipe bowls were produced here, as well as small ornamented porcelain items, as for instance vessels for holy water. 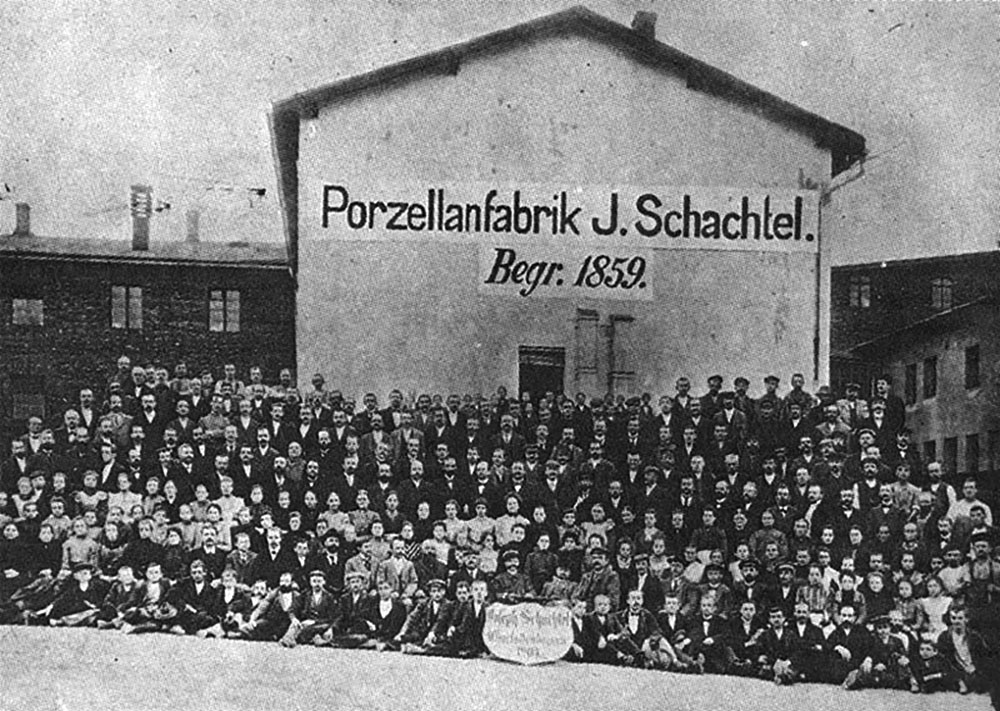 After 1866 the factory, which was located about six kilometres from the Austrian borderline, was extended with adding a new building with tree bigger furnaces for manufacturing ordinary white porcelain. In 1875 the factory was given its own painting room, which resulted from a significant demand for decorated applied porcelain, mainly on the American market. At that time painted plates started to be sold, as well as commemorative cups, and also whole tableware services of the ‘Rococo’ pattern.
The owner of Sophienau was able to benefit efficiently from new opportunities appearing on the market, as at the same time, production of electrotechnical porcelain was introduced – the factory started, as one of the first plants in Germany, manufacturing electrotechnical insulators. During the following years the high-voltage insulators gained the status of the main product, and the factory itself was becoming more and more an electrotechnical plant, which needed not only porcelain production workers and chemists employed, but also engineers of the energetic field. The new railway line, which run through Sophienau from 1880, additionally improved the position of the plant.

In 1887 the factory already had about 200 employees, and apart from the painting room, it also had its own printing works. High-quality kaolin was imported from Bohemia. From 1 January of the same year the factory was transformed into a registered general partnership. Eugen and Max Schachtel, Joseph Schachtel’s sons, who had worked as executives, became shareholders. In the same year, on 16 October, Joseph Schachtel died. Under the guidance of new owners, further development of the factory was in process. Within four years the number of employees grew up to 290.

In 1895, likewise other factories in Jaworzyna, Szczawienko, and Stanowice, also Sophienau supplied the C. Tielsch & Co. porcelain factory in Altwasser, which had problems with a workers’ strike at that time, with the necessary amounts of porcelain sold at cost. Items signed with both the marks of Tielsch and Schachtel come from that period.
In the same year the factory, within the range of further modernization, introduced the first mechanical presses into the production process. Two years later Eugen and Max Schachtel entrusted Gottfried Becker, a many year’s employee, with the management of the factory.

In 1904 the factory had about 350 employees. At that time the locality of Sophienau had 670 inhabitants. Therefore, the Schachtel’s factory became not only the basis of the commune economy, it was also the employer to the population of surrounding localities.

In Sophienau, apart from the electrotechnical porcelain, dinner tableware was still produced, as well as coffee and tea services, and also sanitary porcelain or porcelain toys. At the turn of the 19th and the 20th centuries the factory had its agencies in Berlin, Hamburg, Stockholm, Christiania and Copenhagen, it also took part in fairs in Leipzig.

The year of 1910 was a next turning point in the history of the company. The factory acquired its own railway siding, took up the production of high-voltage insulators, and constructed a testing ground for voltage ranges of 200 thousand volt. Due to the extension, the factory ensured its position in the market, which resulted in expectation of significant demand evoked by fast development of electrical power network. From 1912 the factory possessed at its disposal nine furnaces, a painting room, printing works, and a modern aerography studio. Until World War I the number of employees increased up to 400, and 60% of products were exported.

On 9 March 1913, after a long-time disease, Max Schachtel, the owner of the factory, died at the age of 59. The factory workers remembered him as a kind-hearted man and a fair employer. Eugen Schachtel became the only owner of the factory. Three years later the family property was transformed into a joint-stock company, its name was changed into a new one, derived from the nearby health resort – Charlottenbrunn. The stockholders' equity was one million German marks. The company was headed by Eugen Schachtel, and among the founders there was Otto Barsch, a banker from Berlin. During World War I the company delivered insulators for the needs of high-voltage power network supplying power to the capital of the German Reich.

The new name of the company was not valid for a long time, as after three years there was a return to the previous one – the Joseph Schachtel Factory of Porcelain. In 1920 Eugen Schachtel, the owner of the company, died.

After World War I there was a housing crisis, which induced the factory to look for a solution to the problem, which would bring benefit to the workers. As a result, a construction company was founded, called Porzellanfabrik Joseph Schachtel Hausbau G.m.b.H., which functioned for several years. Whereas the further development of the factory was secured by joining it into the financially strong concern of Strupp from Meiningen in Thuringia.

At that time, the production of tableware porcelain constituted about one tenth of the overall output, however, it was still maintained. The decision turned out to be right, as during the times of crisis, when electrical power industry investment declined dramatically, the increase of the sphere of porcelain tableware production made it possible to survive the crisis. At the end of the twenties the factory offered a wide range of applied porcelain, including services for mocaccino, coffee services, tableware sets, or chocolate boxes of modern styles.

On 23 December 1923 a fire devoured the factory building, where there were three furnaces. The reconstruction was carried out according to the most modern rules, as for those times, and as soon as at the beginning of 1925 new facilities started functioning. The Schachtel factory supplied the German Post with significant amounts if insulators for telegraphic and telephone lines, and the new-constructed in Italy railway line was electrified exclusively with the use of the insulators from the Silesian factory.

In 1928 the Berlin companies of Gesellschaft für elektrische Unternehmungen Ludwig Loewe&Co. A.G. and Bergmann Elektrizitätswerke A.G. took over 98.5% of the factory’s shares. There was a wide-range project implemented and completed two years later for modernization of the electrotechnical department. The new testing ground for high-voltage insulators was at that time one of the largest in Germany. The factory was able to test its products with direct current voltages on the level of 1.2 million volt, and with alternating current on the level of 800 thousand volt. The tests were carried out with the use of special implements simulating air pollution, precipitation, or fog.

In 1930 the factory employed 500 workers but during the world crisis the employment decreased by one third. The sale of electrotechnical porcelain for high-voltage dropped by 28%, and for low-voltage, by as much as o 40%, however, the tableware sale was maintained on the level of just 14% lower. As a result of the fact that the factory maintained two main directions of production, it succeeded to survive the time of the crisis.

For the 75th anniversary of the factory in 1934, in Altenburg in Thuringia, special playing cards were produced, ornamented on the reverse with the factory mark in a shape of two letters combined, J and S.