The plot of land where in 1845 Carl Tielsch’s factory was founded was located at the edge of the locality of Altwasser (Stary Zdrój), which was included into the administration area of Wałbrzych in 1923. The place where the factory appeared, near the still working health resort, had not been chosen by Tielsch at random, but because it was situated in a short distance from a designed railway line, which two years before the founding of the factory connected Wrocław with Świebodzice (Freiburg), located just 12 kilometres away, and was planned to run further to Wałbrzych.

The factory was put into operation equipped with three kilns and about thirty employees. Ernst Bauer (father of Ohme’s plant’s manager) became the technical director of the factory. The basis for the future factory was the policy to produce inexpensive applied porcelain for a larger and larger group of middle class, and also labourers. It became possible also due to purchasing a kaolin mine near Meissen in the fifties of the 19th century, as well as due to Tielsch’s shares in the coal mines in Wałbrzych.
As soon as in five years of production, in 1850, Tielsch’s factory managed to sell a larger part of its output in the American market – in the United States and Mexico. At that time the plant employed about three hundred workers, and it was one of not many German factories which presented their production at the world exhibition in London in 1851. Tableware and coffee services among others, gained the jury’s appreciation, which was certified with a distinction. At the same time the high quality of manufacturing, interesting decorations, and fair prices were given weight to. As soon as next year, at the Exhibition of Silesian Industrial Products in Wrocław, the young factory-owner and his products were honoured with a silver medal. During that period Tielsch’s porcelain was patterned upon the porcelain of F.A. Schumann’s manufacture located in Moabit near Berlin. Rich model-making with sophisticated artistic decorations met the taste of customers, who intended to emphasise their social status with the porcelain items they possessed. At that time, among the appreciated porcelain products of the factory, similarly as of the neighbouring Krister’s manufacture, there were items decorated with views of Silesia and other German regions. 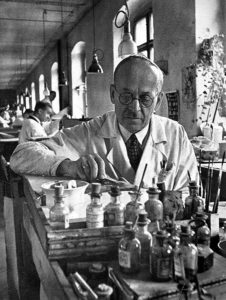 In 1858, in a direct neighbourhood of Tielsch’s factory, Traugott Silber’s plant was to be founded. However, the authorities of Altwasser did not allow construction of another plant, justifying the decision with the harmful influence of a larger amount of plant fumes on the functioning of the health resort. However, it was said off the record that the opinion of the authorities was under significant influence of Carl Tielsch, who was not inclined to allow competition within a close distance. Moreover, Tielsch purchased the first buildings constructed for the needs of future Silber’s plant and included them into his own factory. Finally, Silber founded his factory two years later in Königszelt (Jaworzyna Śląska).

At the edge of the sixties and the seventies of the 19th century the factory employed a record number of 1500 workers, porcelain was burned in 28 kilns altogether, the annual output of white porcelain reached the value of 600 thousand thalers, and the value of decorated porcelain – 150 thousand thalers. The latter included also luxurious items, as large vases, chandeliers, or figurines, especially sought-after and purchased by the middle class. Despite export successes, as for instance in Holland, Denmark, Norway, and Sweden, the main recipient of porcelain was the German market.

At the beginning of the seventies of the 19th century, the annual production reached 20 million items of a value of 750 thousand thalers. Employment still oscillated around 1500 people, including about one third of women, which is worth mentioning.

In 1880 the financial situation of the firm made it possible to Tielsch to purchase a factory of mirror glass, situated in a distance of nearly two kilometres, in the locality of Sandberg, at that time belonging to the health resort of Salzbrunn (Szczawno Zdrój, at present the area is a part of the Piaskowa Góra quarter of Wałbrzych), and to develop during the following years into the largest in the eastern part of Germany glassworks. Due to this investment, Tielsch constructed a glass pavilion, which evoked common admiration, at the Silesian Exhibition of Craft and Industry in Wrocław in 1881, where he presented his porcelain products.

Carl Tielsch died in 1882, and after his death the porcelain factory was taken over by his son from his first marriage, Egmont. He also took his late father’s place in the senior board of the chamber of commerce in Świdnica, and he preserved the position until 1920. The management board did not change, the current directors and executives kept their posts: Heinrich Eisenecker, Fritz Müller, and Reinhold Kindler. The latter belonged to so called ‘Three Magi’ of Silesian porcelain for many years, that is representatives of the factories belonging to Tielsch and Krister, as well as the Königszelt factory, who used to meet within the period of Christmas in Königsberg to discuss their shares in the market within the area of East Prussia.

On 1 October 1897 the position of technical director in Tielsch’s factory was taken over by Georg Faist, who previously worked in Carl Krister’s plant. Soon after that, in 1904, shortly before the 60th anniversary of founding of the factory, Faist received a serious task – to extend the factory, which was already apparently too small as for such a large scale of production. During his travel to England, North America, and France, Georg Faist gained experience which made him able to construct new buildings to meet the recent technical and sanitary standards. Moreover, for burning porcelain he applied tunnel kilns, so far used only for burning stoneware. Several years earlier, in 1894, Hermann Ohme’s factory in Nieder-Salzbrunn near Wałbrzych decided to introduce burning porcelain in such furnaces and the technology was patented by Ohme. Originally, in 1905, in Tielsch’s factory a kiln of a length of 42 metres was constructed, however, it turned out to be too short. A year later another one was built, of a length of 60 metres, which met the needs. This way, at the beginning of the 20th century, in Altwasser there was a factory functioning, which at that time was a pattern for others in the respect of modernity, economy, safety, and work conditions. The tunnel kilns started to be commonly used in ceramic industry. The new technology was based on the procedure where porcelain items were carried on iron trolleys through a 60 to 70 metres long tunnel kiln and gradually they reached a proper burning temperature, and then, they were also gradually cooled. Applying the procedure made it possible to shorten the burning time from 5 to 7 days in traditional furnaces to just 50 to 60 hours. Among innovative solutions applied in the factory, it is worth mentioning also the fact that the factory halls were constructed as a whole, together with the roofs, of reinforced concrete, they were also equipped with an up-to-date as for those times system for suctioning dust and powder accompanying the production process. 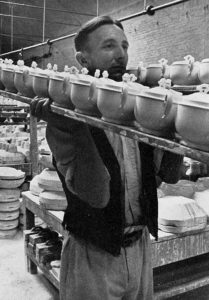 At the beginning of World War I Tielsch’s factory still employed about 1500 workers. In the catalogue from 1914 it is possible to find 1637 products of various kinds, which was just a choice among significantly wider range of assortment, as the producer guaranteed. The prices oscillated from 1.80 to 10.50 marks for a dozen cups without decorations and from 0.30 to 3 marks for a coffee pot without decorations. For comparison, a week wages of a factory worker was then a sum from 15 to 20 marks. The impressive choice was certainly multiplied with various decorations. Outside the factory, Tielsch’s white porcelain was decorated in painting rooms in Altwasser and also in other localities, as for instance in H. Steinert’s painting room in Landeshut (Kamienna Góra). During the period, almost 60% of production was exported, and the factory possessed its own showrooms in Berlin, Hamburg, Brussels, Vienna, and Paris, and also agencies in Alexandria, Amsterdam, Athens, Belgrade, Beirut, Buenos Aires, Bucharest, Havana, Cairo, Constantinople, London, Lyon, Mexico, Montevideo, Thessaloniki, Sofia, Tunis, and Valparaiso.

During World War I, similarly as in many other industrial plants, there was a period of limitation of the amount of production, imposed by the authorities in Wrocław. In case of C. Tielsch’s factory, the warrant decreased production down to 60%. Additional difficulties were caused by calling numerous workers up to the military service. In 1917 the C. Tielsch & Co. firm was transformed into a company limited by share with its capital of 3 million marks. A shareholder became, apart from Egmont Tielsch and director Georg Faist, also Hugo Auvera from the C.M. Hutschenreuther porcelain factory in Hohenberg in Bavaria, which took over the controlling interest number in 1920. This way, Tielsch’s firm was incorporated, as the largest one, into the structures of the Hutschenreuther’s concern. A year later, when the management board of the concern was moved from the seat in Bavaria to new buildings in Dresden, also director Faist moved there, who was at that time celebrating his 25th anniversary of employment in Tielsch’s firm. Georg Faist died of heart attack at the age of 60 on 8 March 1923. The management of the factory was taken over by Hugo Auvera, who as the general director, together with his management board, conducted the firm through the period of inflation. 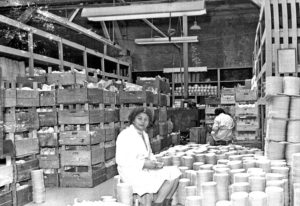 A result of World War I was a decrease of export from 60% to 40%, however, due to investment and extension of the factory, the firm managed to keep its position in the market and to reach the level of employment of 1400 workers again at the end of the twenties of the 20th century. Gradually, former foreign markets were regained and new ones were acquired, including also exotic places as for instance Australia, New Zealand, or South Africa, which used to be under operation of the agency in Hamburg. The development of the factory was impeded by the world crisis, which resulted in limitations of the amount of production, mainly for the reason of clients’ insolvency. As a result of the crisis, there was a decision made about the total take-over of Tielsch’s factory by Hutschenreuther’s concern, which formally took place on 23 March 1923, and from this moment, the plant in Altwasser, still under the process of extension, ceased to exist as an independent firm and became a branch of the C.M. Hutschereuther’s porcelain factory. Such a state of affairs lasted until the end of World War II, which was a period when the plant, intact by warfare, produced mainly substitute porcelain for people who had lost their belongings during bombardments. 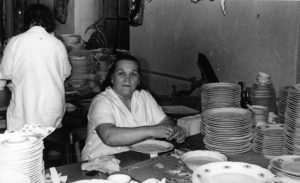 At the end of 1944, when the Red Army was still at the eastern side of the Vistula river, the factory started preparing for the 100th anniversary of its foundation. However, the celebration did not take place at all, as after the end of the war the factory, covering a terrain of over 16 hectares, with buildings of the total area of 64 thousand m2, and also the quartz mine in Grüssau (Krzeszów), as well as the clay excavation plant in Jaroszów near Strzegom, were taken over by Polish authorities. The manufacture was nationalised entirely. In 1953 it was given the name of Zakłady Porcelany Stołowej ‘WAŁBRZYCH’ (‘WAŁBRZYCH’ Porcelain Tableware Plant) and for the next 40 years the factory continued production, often according to former Tielsch’s designs. The factory was closed in 2012, and in 2017 the process was started of pulling down the old factory buildings.